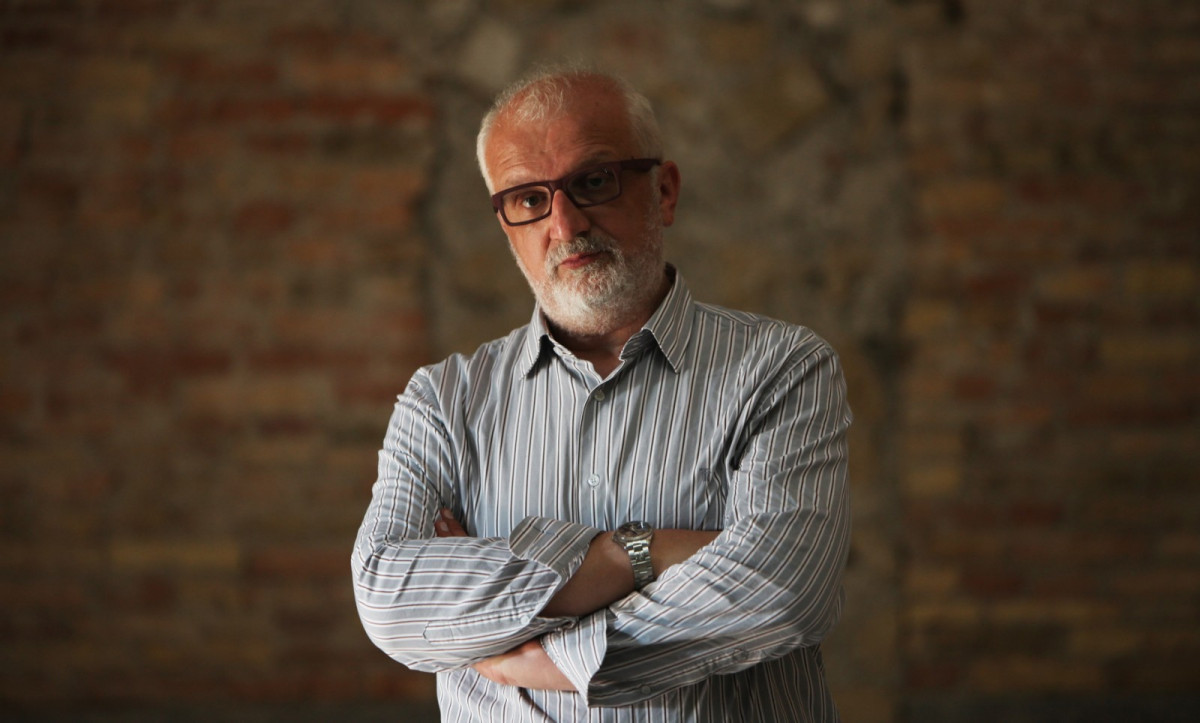 Haris Pašović has been one of the leading theatre directors in South East Europe for more than three decades. He has directed a number of shows and participated in many of festivals worldwide including Edinburgh International Festival; Festival d’Avignon; UK City of Culture; Napoli Teatro Festival Italia; National Arts Festival of South Africa; Singapore Arts Festival. His productions of Frank Wedekind’s “Spring’s Awakening” has been considered a landmark in the theatre of the former Yugoslavia. During the Siege of Sarajevo he produced a legendary “Waiting for Godot” by Samuel Beckett directed by Susan Sontag and he established the Sarajevo Film Festival. His visual artwork “Sarajevo Red Line”, an 825 m long installation in the centre of Sarajevo made the headlines around the world in 2012. He’s directed some massive spectacles like “Romeo and Juliet” (Sarajevo); “Conquest of Happiness” (Derry/Londonderry) and “A Century of Peace after the Century of the Wars” (Sarajevo) involving dozens of participants as well as a number of vehicles; live music and video-projections. He is a director of East West Centre Sarajevo. Currently, Pašović has been developing “Wonderful Life,” a postopera about one of the most significant Viennese families in the 20st century the Wittgensteins and Ludwig Wittgenstein.

He directed in some of the most important theatres in the former Yugoslavia and participated in a number of festivals worldwide. His productions of Frank Wedekind’s “Spring’s Awakening” and “Calling the Birds” based on Aristophanes’ play “The Birds” (both at the Yugoslav Drama Theatre, Belgrade 1987/90) have been considered as the landmarks in the theatre of the former Yugoslavia. Likewise, Samuel Beckett’s “Waiting for Godot” (Belgrade Drama Theatre) and Alfred Jarry’s “Ubu Roi” (National Theatre Subotica) have been considered as the classic productions in the ex-Yugoslav theatre, the former being the last Yugoslav premiere performed on the eve of the war in the country. As the artistic leader of theatre “Promena” (“Change”), Pašović directed with a great success Peter Wiess’ “Marat/Sade”; Alexander Wedensky’s “The Christmas Three at the Ivanovs”; ’ “Simon the Magus” by Danilo Kiš on the lake surrounded by sand desert; Luis Bunuel’s “Hamlet” placed in a fortress sitting on a rock rising from the Adriatic Sea (Dubrovnik Summer Festival) and many other plays.

During the siege of Sarajevo (1992-95) Pašović spent most of the time in Sarajevo managing the MES International Theatre Festival. He directed plays and produced several shows, among others now legendary “Waiting for Godot”, directed by Susan Sontag. This work with Ms. Sontag has been reported across the globe and has become a reference in the history of theatre. In 1993, while Sarajevo was still under the siege, he also organized the first Sarajevo Film Festival “Beyond the End of the World”. Pašović managed even to tour in 1994 in France and several other European countries (under the UNESCO auspices) with the Sarajevo Festival Ensemble invited by Peter Brook and the Bouffe du Nord Theatre. During the tour, the Ensemble preformed two productions he had directed in the besieged city: “Silk Drums” based on the Noh plays, and “In the Country of Last Things”, based on Paul Auster’s novel in which he collaborated with Vanessa Redgrave and Maurice Benichou.

After the war, Pašović directed several documentaries including “Greta”, a story on Prof. Greta Ferušić who survived both Auschwitz death camp and the Siege of Sarajev o; also “National Geography”, a film about missing people from the Srebrenica genocide; a documentary trilogy entitled “Home,” “Love Thy Neighbour” and “The Balkans – Blood and Honey” about the American journalists David Rieff, Peter Maass and Ron Haviv, who had reported from the Bosnian war and an art documentary entitled “À propos de Sarajevo” about the Sarajevo International Jazz Festival. Some of these documentaries were shown at the New York Jewish Film Festival in Lincoln Centre, the San Francisco Jewish Film Festival, as well as at the Museum of Modern Arts in Stockholm, the Contemporary Arts Institute in London, at the IDFA Festival in Amsterdam, the Mediterranean Film Festival in Rome, as well as at the Sarajevo Film Festival and several others.

In 2002, he made a spectacular comeback to theatre directing Shakespeare’s “Romeo and Juliet” in front of the Parliament of Bosnia and Herzegovina in downtown Sarajevo. This was a brave futuristic production about a Muslim Romeo and a Christian Juliet, which involved 25 actors and musicians playing on the 1500 sq. m of stage, a 60-member crew, arms, military vehicles, fireworks, video projections across the façade of the Parliament building and it halted the traffic in the main city artery for 4 hours each night it was performed.

In 2005, Pašović established the East West Theatre Company. He directed William Shakespeare’s «Hamlet» as the biggest regional co-production in decades with an international cast. His “Hamlet” was situated on the Ottoman court and Hamlet was a young Muslim prince fighting a corrupt state. «Hamlet» was named as the Theatrical Event of the Year 2005, while Pašović was named the Person of the Year 2005 /Theatre. This show toured in St. Petersburg, Belgrade, Zagreb and Ljubljana.

In 2006, Pašović directed a visually striking production of “Faust” based on Christopher Marlowe’s play and the texts of Emil Cioran. It was a futuristic show about artificial intelligence, bio-robots and ethics in the future. The show opened 2006 International Theatre Festival MES Sarajevo.

The same year Pašović directed Roger Vitrac’s “Victor or the Children in Power” at the ZKM Theatre, Zagreb, Croatia.

In 2008, Pašović together with Tamara Curić, a Croatian choreographer, choreographed and directed “Bolero” by Maurice Ravel. It opened “Platforma”, a contemporary dance festival in Zagreb.

In 2009, Pašović directed Henrik Ibsen “Nora” becoming an instant success. The play was shown in Sarajevo and toured in Macedonia at the Ohrid Summer Festival and opened an International Theatre Festival Desire in Subotica.

In 2010, Haris Pašović was the author and the director of an international theatre dance production “Football, Football”. The play was coproduced together with East West Theatre Company, Napoli Teatro Festival, Singapore Arts Festival, Les Ballet C de la B, a legendary contemporary dance company and Flota Institute from Slovenia. “Football, Football” played in the main programmes of Singapore Arts Festival and the biggest African theatre festival. It also opened the biggest Italian theatre festival that year Napoli Teatro Festival and performed in Sarajevo with big success. The artists coming from 4 continents (Europe, Asia, Africa, Australia) and 7 countries (Italy, Slovenia, Singapore, Burkina Faso, Bosnia and Herzegovina, China and Australia) got together in this unique piece, the biggest about the football ever produced. “Football, Football” was a highlight of the National Arts Festival in South Africa that was taking place during the FIFA World Cup 2010.

In 2011 Pašović has directed a spectacular show “Europe Today” based on an essay by Mirosal Krleža, a biggest Croatian author, featuring some of the greatest artists in the Balkans – Miki Manojlović, an internationally acclaimed actor; Edward Clug, a dancer and choreographer and Laibach, a neoclassic bend.

In April 2012, Pašović created a concept and directed “Sarajevo Red Line” commemorating those who were killed in the city’s siege twenty years earlier. “Sarajevo Red Line” was a concert and a visual art installation consisted of 11,541 red chairs, one for each victim, placed on the main Sarajevo street. The event was attended by dozens of thousands of people and made the headlines worldwide. Some of the biggest world television stations (BBC, CNN, ABC and many others) reported the whole day about this event and all major media virtually around the globe reported about “Sarajevo Red Line.”

In 2013, Pašović teamed up with the composer Danijel Žontar and soprano Aida Čorbadžić and they created a beautiful classical concert for voice and piano “Songs of Water, Bread and Love” inspired by the traditional songs from South-East Europe. Pašović branded it, half-jokingly, as the “best kept secret in the Balkans and it is that we can be wonderful too!”

Also in 2013, Pašović directed to the great critical acclaim one of the biggest international co-productions that year – “The Conquest of Happiness,” a spectacular theatre event inspired by the writing of Bertrand Russell, which had its World Premiere in the UK at the Derry/Londonderry City of Culture. The show took place at the Ebrington Barracks overlooking the Peace Bridge and the city of Derry/Londonderry. In Bosnia and Herzegovina, the show opened the International Theatre Festival MES. It was performed in a magical setting under the Old Bridge in Mostar at the meeting point of two rivers. The show involved an international cast and a 150-member choir. A dozen of vehicles (military vehicles, bulldozer, motorbikes, buses and tracks) were moving around during the show in what looked as a massive film set.

In 2014, Pašović staged the multimedia event “A Century of Peace After the Century of the Wars.” An epic production about the war and peace was staged on the famous Latin Bridge in Sarajevo’s Old City, the exact location of the Sarajevo Assassination that triggered the First World War. More than 300 participants on stage coming form 11 countries and as big the technical crew and production staff created a remarkable event composed of music, lights, drama and video – playing on the stone bridge over the river for more than 10.000 spectators and television audience across the region. Pašović’s work was again reported internationally as the first big artistic event commemorating the WWI.

In 2015, his show “Hope” premiered in the main program of the Avignon Festival, France.

The same year, his show “Roses for Anna Teresa” performed at the Royal Swedish Opera in Stockholm as a part of the Swedish tour.

Also, the same year Pašović gave the speech at the Lincoln Center Global Initiative in New York of which he was one of the founding members.

In 2016 Pašović directed the shows “What Would You Give Your Life For?” and “Uncovering a Woman” and also participated at the Clinton Global Initiative in NYC. He also directed the Bosnian performance at the 2016 Eurovision.

Pašović writes the plays as well. He wrote the plays; “Rebellion at the National Theatre”, “Ulysses”, “Silk drums”, “Bolero, Sarajevo,” “Football, Football,” “What Would You Give Your Life For??” and “Uncovering a Woman.” He also adapted several plays including Alfred Jarry’s “Ubu Roi”, Aristophanes’ “The Birds”, Nigel Williams’ “Class Enemy” and several others.

He writes essays and articles (“Divine Uncertainty and the Fall of Nationalism” for BBC World Service; “City the Engaged” for the Iowa University Writing Program; “Love for Life with the Element of Divine Madness” as a key-not speech for the Edinburgh International Cultural Summit, etc.)

Pašović directed the short movies “Clown” and “Un Beau Film” (based on Guillaume Apollinaire’s short story) in 2012. He directs music videos and advertisements. In 2014, he directed “VISA World Cup Samba of the World – Bosnia and Herzegovina” advertisement.

Pašović is a co-founder of the Directing Department at the Performing Arts Academy. Several of his students are today internationally acclaimed film directors. Pašović lives in Sarajevo. He is a professor of the Performing Arts Academy in Sarajevo and the Bled School of Management, Slovenia, where he teaches the subject Arts and Leadership. He is a visiting professor at the Academy of Arts in Novi Sad, Serbia.

Speaking and lecturing: Tailor made training programs by the IEDC Bled School of Management, Slovenia

This includes multiple speeches, lectures and panel discussions for the clients BAE Systems, UK and Achmea, The Netherlands.

His education includes the Academy of Performing Arts in Novi Sad, former Yugoslavia; the Fulbright Scholarship in the USA (University of Hawaii, Honolulu, New York University and the University of Wisconsin, Madison); the UNESCO High Levels for Directors, Festival d’Avignon, France, and other professional trainings such as: Scholarship at the Nordisk Theatre Institute, Denmark and two semesters on the Master Program of the Lancaster School of Management, UK.